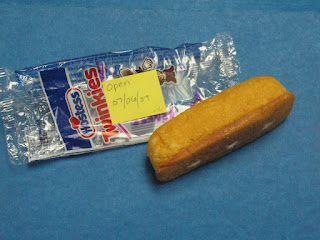 Some of you may remember that two years ago Marti, our customer service manager, set aside some Twinkies to test the urban legend that they have no expiration date. I published the results in two posts. Well, another year has rolled around. Here is Marti’s e-mail:

Hard to believe it has been another year since the great Twinkie experiment began! For those of you who were not here last year here is the background….

In July 2005 there were some extra Twinkies in the break room that were nearing their expiration date. Dave reduced them to $.10 to try to sell the remaining Twinkies. There had been some debate as to whether or not Twinkies have a shelf life of 12 years so I decided to conduct my own little experiment. I purchased 5 Twinkies and put an "open on" date on each of them, spreading out the dates by one year each. Today I have opened the second of five, which means this Twinkie is now 2 years old.

I think after a year it was safe to say that Twinkies really do not have a shelf life of longer than a few months. Now, two years later the Twinkie looks more like corn bread. It is starting to crack, and if you hit it against a hard object it sounds as if it has solidified and is no longer a sponge-like object. 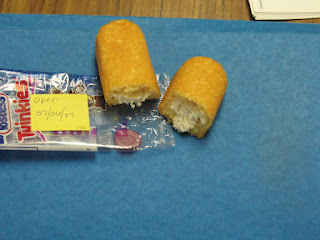 Not content to just look at them, Andy, our webmaster, once again took the plunge:

I got out a knife, and tried to cut a piece off. It split like a graham cracker. It's crunchy and dry, a bit like a shortbread cookie, and only slightly sweet. Taste-wise, cornbread is the closest thing I can compare it to. The filling isn't terribly different from the, um, shell, but has a slightly silkier texture and a hint of flavor like butter frosting. There is a faint, but bitter metallic aftertaste.

We really should have gotten a video of this and put it on You Tube, because the pictures don’t have sound. Marti took and pounded the Twinkie against her desk. It sounded like a block of wood.

I can’t wait until next year!

By the way, if Andy starts mutating, I’ll let you know.
Posted by jps at 4:10 PM