Yes, The City of Ugarit at Tell Ras Shamra arrived yesterday afternoon at about 2:30; seven pallets full, 200 boxes, 90 degrees Fahrenheit. We don't have a dock that trucks can back up to, the street is too narrow, so we end up doing it by hand. Each case weighed 19 kg (42 pounds), handed off to the next person in line, 160 times. We kept 40 boxes for the shipping warehouse to cover backorders and new orders that will come pouring in—won't they?

The backorders should start shipping today, so look for yours in the next several days (unless you are international). I have mine at my desk and it is a beautiful color book with updates from the French version inserted at the end of most chapters, both bibliography and text.
Posted by jps at 9:39 AM No comments:

For those of you who are anxiously awaiting the next fascicle of BHQ, Ezra-Nehemiah, here is the latest update, direct from Richard Weis, who is one of the editors:

"The proof-reading for Ezra-Nehemiah took rather longer than anticipated, so it missed the March date... The proof-reading was completed earlier this month, so the fascicle should be in production -- soon if not even as we write."

Quote for the day

“The absence of revival in evangelicalism today certainly does not reflect a lack of activity and opportunities. We have more Christian concerts, conferences, programs, strategies, media events, books, tapes, magazines, and radio/TV ministries than any generation in history. In fact,we have more prayer gatherings and more events and resources geared toward ‘spiritual awakening’ than ever. But something is missing.

“I remember discussing this matter with a ministry leader who observed, ‘Lots of people are praying, and lots of people are repenting, but so few are changing their lifestyle.’ A light went on in my mind when I heard that statement. The fact is, if people are not changing their lifestyle, they’re not repenting. And if we’re not repenting, then all our singing and praising and praying and producing are useless—perhaps worse than useless, because all the noise and activity may deceive us into thinking that we’re OK and that we are actually experiencing revival.”

More on Yon City of Ugarit

The continuing saga of an international shipment...

The seventh day of the 5-7 days on the train from California to Chicago was up on Wednesday. Today I was informed that the product is available. What that means is that our customs broker now has to find a truckline to bring it to us in Warsaw, Indiana. Of course with Monday being Memorial Day, we won't see it until at least Tuesday, more probably Wednesday.

It now becomes a race against the calendar. After all, the world is going to end on 06-06-06 (see previous post here). It would be nice for people to be able to read this long-awaited book before that :)

If the world ends first, you can at least see the cover and the details:

The City of Ugarit at Tell Ras Shamra

Update, 3:00 PM Friday: We now have official word that the truckline will deliver it on Tuesday, so it might beat the end of the world after all! 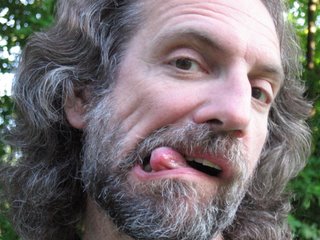 Renee, Joel and Joshua (our daughter, son-in-law, and grandson) left yesterday. We had a blast with them. Renee fell in love with the digital camera and took this picture. She says it is the best one of me yet. Don't you love daughters? :)


This is a picture of Joel playing with Joshua. 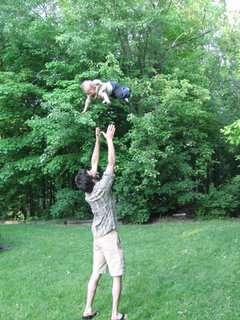 One of the things I do a few times a week is search Blogger for all of the occurrences of Eisenbrauns. I must have missed this one, because it is dated April 29.

It is a site called "toronto dermatologist specializing in black skin"

Judging by the other links, someone took ANE to be a mistake for Acne! Anyone following the link to us and looking for dermatology will be mightily disappointed :)
Posted by jps at 12:08 PM 1 comment:

The latest Hermeneia volume just arrived. It wasn't supposed to be released until June, but here it is:

Well, I managed to get through a weekend without reading a single page, not a word of Greek, Hebrew or Latin. I didn't even make bread. But, I had a blast. Why? Because we are taking care of our 14 month old grandson, Joshua. Joel and Renee are at a wedding in North Carolina and they entrusted him to us on their way through. Here's what he looks like now: 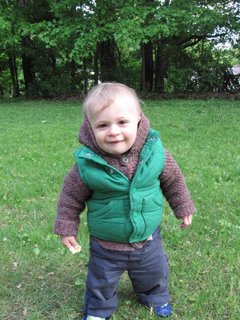 <idle musing>
I spent Saturday at a convention. I have always been of the opinion that if you make good quality biblical resources available to people, they will buy them and use them. Well, I am starting to rethink that opinion. I now think people want to be entertained. They no longer want to think. If it takes longer than a sound bite to explain something, then it must be too difficult or unimportant. Below is a picture of the Carta half of the booth. One of the other exhibitors told me we had the nicest looking booth at the show. Unfortunately, that didn't transfer into sales. This was my second year at this convention, last year went well for a first year, so I decided to try it again and take more stuff. It is a cheap convention to attend, and only an hour drive. 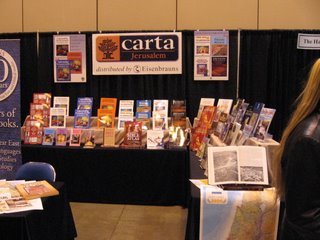 Well, initial reaction is I should have stayed home and played with Joshua. I don't think I even covered my expenses. Which is why I am now becoming convinced that people only want entertainment. People were spending money, but it was only on stuff that was predigested and follow the dots. We sell primary material that requires effort on the part of the person to digest it. Too highbrow. One of the organizers told me that our stuff was good, but he still hadn't read the stuff he bought last year, so why buy more?

Oh well, I got Sunday with Debbie and Joshua and we had a blast together. 14 months is a fun age. They can walk and babble and love to play with you.

But now it is time to go to work and empty the van of all the leftover books...
</idle musing>

The vagaries of international shipping

We printed The City of Ugarit at Tell Ras Shamra overseas, something we don't usually do. We did it because of all the color used in the book. We couldn't have done it at a reasonable price – Eisenbrauns reasonable :) – here in the states.

The shipment was supposed to arrive in Chicago yesterday. We would then get it in about 2-4 days. Well, it was delayed in customs for checking. Ugarit is in the Middle East, so you never know, could be dangerous :) Anyway, I digress.

It is now being loaded onto a train bound for Chicago. It will arrive in Chicago in 5-7 days. Just in time for the Memorial Day holiday, which will delay it another few days. All in all, we should see it either May 31 or the beginning of June.

Speaking of which, I saw the worst advertising piece the other day. A certain Christian publisher is putting out a fictional book on the dispensational view of the endtimes. The date of release is 06-06-06. Guess how they are advertising it? Yep, 666, be ready.

Which caused one of the customer service representatives to quip, "I knew the end of the world would come before Yon got published!" Now you know.
Posted by jps at 10:43 AM No comments:

The year 2005 saw 172,000 new books released in the United States, according to Bowker, the world's leading provider of bibliographic information. but what does 172,000 titles mean?

"To transport one copy of each title, the vehicle would have to be capable of hauling 86 tons or 21 full grown elephants. Laying the books down in a straight line would require a little over 16 miles of railroad tracks."

<idle musing>
That's a lot of paper! Eisenbrauns contributed about 12 of them :)
</idle musing>
Posted by jps at 7:37 AM No comments:

Idle musing for the day

"If a man strikes me, I should not pull out a revolver and shoot him. The Spirit of the Lord doesn't teach me revenge; He doesn't teach me that it is necessary to draw the sword and cut a man down in order to defend my rights. Some people say, 'You are a coward if you don't strike back.' Christ says, 'Turn the other cheek to him who smites.' I would rather take Christ's teaching than any other. I don't think a man gains much by loading himself down with weapons to defend himself. There has been enough sacrificed in this country to teach men a lesson in this regard. The Word of God is a much better protection than the revolver. We had better take the Word of God to protect us, by accepting its teaching and living its precepts." — D.L. Moody (a raving liberal?) 1847-1899.
Posted by jps at 7:09 AM 2 comments:

Forthcoming this week from Eisenbrauns

We are releasing a paperback version of From Cyrus to Alexander. It is supposed to arrive this week from the printer.

There is an interesting story on this one. It was originally supposed to arrive today, but the paper delivered to the printer was thicker than specified. Normally that isn't too much of a problem, but when the book is 1200 pages long it becomes significant. They ended up having to reprint the covers with a wider spine, which delayed the delivery a few days. But, it isn't supposed to be raining as much the next few days, so at least we won't have to unload in the rain. I hope :)

Here are the details, for those of you interested:

From Cyrus to Alexander
A History of the Persian Empire
Translated from the original French by Peter T. Daniels
by Pierre Briant
Eisenbrauns,2006
xx + 1196 pages,English
Paper
ISBN: 1575061201
Your Price: $49.50
www.eisenbrauns.com/wconnect/wc.dll?ebGate~EIS~~I~BRIFROMCP

A Student's Guide to Textual Criticism of the Bible
Its History, Methods & Results

I just finished this book recently. It was delayed for over a year, originally planned for late 2004/early 2005 which may explain the inconsistency in some of the chapters. For instance, on page 102 he states (incorrectly) that only Jeremiah and Isaiah of the Hebrew University Bible Project have been published, but on page 112 he correctly states that Ezekiel is also published (2004).

I found the book quite good as an introduction to both Old Testament/Hebrew Bible and New Testament textual criticism. There are better books for each, but this puts them both together. Because of the layout of the book, there is quite a bit of redundancy. For example, he has a chapter on determining the most plausible reading and then a chapter on the sources. Of necessity there is a large overlap in what is covered by the two chapters (both OT/HB and NT).

One nice feature is the bibliographies at the end of each section. He also includes a glossary, as well as name, subject, and scripture indices. I did notice a real howler on page 274 where he states the Diatessaron was created about A.D. 70 (it should be 170). The font is also different for names with diacritics, but other than that, the book is well done.

It would make a good introductory textbook for a class that needs to cover the basics of text criticism for both testaments. For more serious work, you are going to need the other references listed in his bibliography.

OK, I'm going to start blogging again. But, it is going to be more limited.

Eisenbrauns recently published this little gem that I am currently reading:

As a classicist by training, I found the chapters on the Alexandrian Homeric scribes fascinating. I am now on chapter 3, moving slowly through the book.

Book Prize for an Eisenbrauns Book!

I promised to post interesting book announcements, so here is one: