Well, traffic in the hall was a bit better today. You could still do gymnastics in the aisles for a good portion of the day, but there were several times when it was actually approaching being busy. Here's hoping that Monday is a busy day...

As it always works, I had a person looking for one of the titles I didn't bring. I asked them if they would be at SBL as well, since I would have it there. Nope. They took an order form and will order it.

A highlight is that the mug is a hit. I don't know if people are as interested in the graphic as they are the shape and color, at least that is what they all comment on. That's kind of discouraging in a way; we worked hard to get the graphic to look good on the mug (OK, Andy did), and people are more excited about the shape and color! Oh well, that's marketing. At least it says Eisenbrauns on it, so they will remember where they got it :)

Here is a picture of our booth. I'm thinking about turning the banner into a bookmark. What do you think? Would you want an Eisenbrauns bookmark with 9800 book cover images on it? 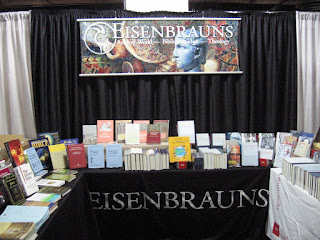 After the exhibit shut down for the night, Bobby K (Hendrickson) and I went out for dinner, but first we hopped on the elevator to drop stuff in our rooms. The elevator stopped at my floor; the door opened about an inch, and stuck, then closed. Uh-oh. Visions of being stuck on an elevator danced in my head. But, we held the “door open” button down and it opened. Most of the people on the elevator opted to get off and try another one. After I dropped my stuff in the room and came back, the same elevator was there again, but the people waiting said they had barely gotten off it and weren't about to go on it again. We all waited for the next one.

Safely back in the lobby again, I met Bobby and we went to a Mexican restaurant on Wabash. I can't remember the name of it, but it is right next to the Opera (an Asian restaurant—obvious, right?). The food was good, the company was better (thanks, Bobby) and we had a good time talking for about 3 hours. By the way, their cheesecake dessert was unlike anything I had ever tried before and excellent; if you ever get there, be sure to try it.
Posted by jps at 9:57 PM

Hey - sorry the conference turned out to be a bust. I will try to come by your booth at SBL. Maybe we can get a meal together