When returned to the context of human activity in general, so-called ritual acts must be seen first in terms of what they share with all activity, then in terms of how they set themselves off from other practices. Ritualization is fundamentally a way of doing things to trigger the perception that these practices are distinct and the associations that they engender are special. A great deal of strategy is employed simply in the degree to which some activities are ritualized and therein differentiated from other acts. While formalization and periodization appear to be common techniques for ritualization, they are not intrinsic to 'ritual' per se; some ritualized practices distinguish themselves by their deliberate informality, although usually in contrast to a known tradition or style of ritualization. Hence, ritual acts must be understood within a semantic framework whereby the significance of an action is dependent upon its place and relationship within a context of all other ways of acting: what it echoes, what it inverts, what it alludes to, what it denies.— Ritual Theory, Ritual Practice, page 220

<idle musing>
That's the final snippet from this book. I hope you learned something from it. I found it very interesting, but then...well, we won't go there : )

Not sure what I'll be extracting from next. I got a whole bunch of great books at AAR/SBL that I can't wait to dig into. We'll see what happens. I'm also in the middle of editing two books, plus working for Eisenbrauns part-time, so I don't have a lot of free reading time right now. And the books I'm editing don't lend themselves to extracts very well—Syriac grammar anyone?

America and Its Guns
A Theological Expose
BY James E. Atwood
FOREWORD BY Walter Brueggemann 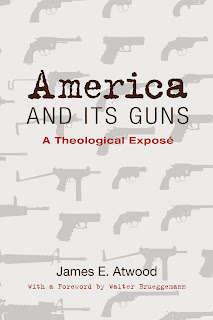