The weekend that was

We had a storm come through on Saturday afternoon, with winds up to 60 MPH. It knocked down both my pole bean trellis and my cucumber one; they were both made from 1x2 and 2x2 lumber. I spent a few hours yesterday rebuilding them and reinforcing them by tying them to the garage, the old clothesline post, and a pair of fenceposts. I don't think they will come falling down again. Miraculously, none of the plants were destroyed.

We also were without electricity for about 10 hours. The electricity had flickered a couple times, and then a blast of lightning hit so close that the boom was almost simultaneous with the flash. Probably the closest I've ever experienced. Later we found out that most of our side of town was without power. We got ours back around 2:00 AM. Others didn't get their power back until Sunday afternoon.

When we went out for a walk after the storm, there were limbs down everywhere. On East Avenue, tree had fallen across the road, blocking it. It had also taken out some power lines. It was an older maple that was hollow inside, so it basically snapped into pieces.

Sunday afternoon, about 20 hours after the storm, I was working the garden (putting the trellises back together) when I heard a loud crash from the front yard. I thought maybe someone was doing some cleanup across the street and kept working. A minute or two later, a neighbor told me to look out front. A limb from our maple, weakened by the storm, had cracked and fallen across the street! Normally, there is a vehicle parked under that limb, but they were gone. Five minutes later, they came home. Needless to say, they were extremely thankful that their vehicle wasn't parked there when the limb fell.

Here are a couple of pictures of it. 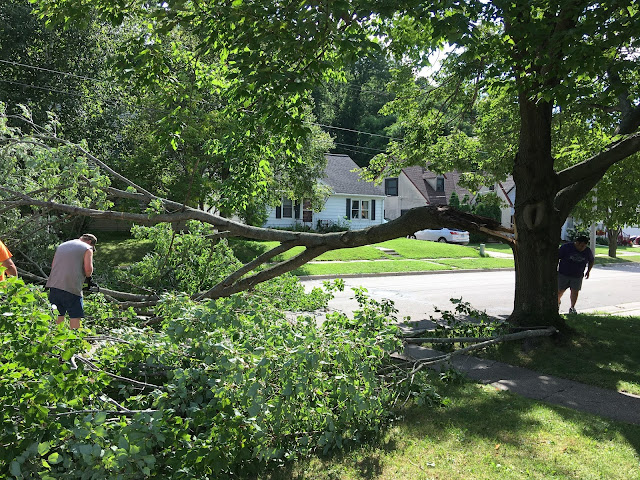 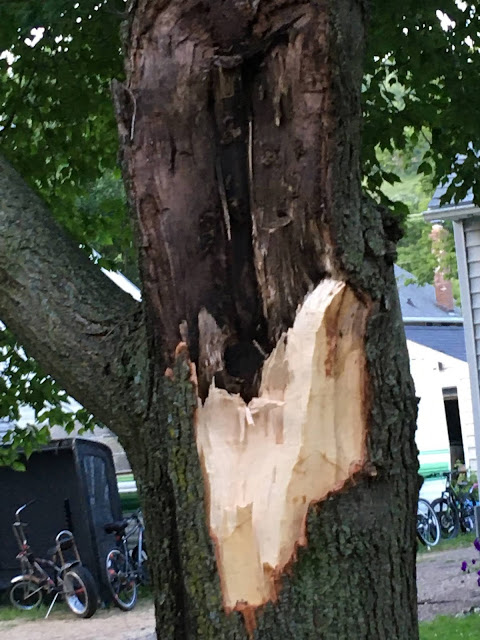