We had our first frost of the year last night, about two weeks later than normal—and it was a hard frost. I didn't cover anything because it was so late. The daytime temperatures aren't going to stay warm enough for any meaningful growth for tomatoes, peppers, or squash.

It was a good, if dry, summer for gardens. The strawberries were small and few because of the heat and dryness, even though I watered them. But other than that, the rest of the garden has done well. I have three 50-gallon rain barrels, and I emptied them twice because of the drought. I even had to augment that with city water by filling one of the barrels twice. And when it did rain, it was sometimes too much—one week we received seven inches of rain in five days! Because I have raised beds, they were able to absorb it, but it sure made a mess elsewhere.

I haven't posted much on activities this summer, either because of laziness or being too busy doing other things. The truth is, blogging isn't the attraction to me it once was. Part of that is the community that blogging used to represent has moved to social media. That happened about eight to ten years ago, but I resisted. And part of it is that other things take up the time that I used to spend blogging.

Being a contract employee has its benefits, such as flexible hours. But it also has the downside of seeing too much of life as billable hours. Work tends to creep into every corner. After almost ten years of doing this, I'm still learning (or maybe not learning) to balance that. And the amount of time I don't spend reading nonbillable stuff or blogging is a direct reflection of that.

That being said, this summer did contain a couple of trips to see my parents. The first trip, Ryan (our son) and I intended to take my 89-year-old dad on a canoe ride down the Red Cedar River. I had called the outfitter a couple of weeks before, but the water was too low, but it had rained that week and the water level looked good. But once we got there, they had closed because the water was too high! So, instead, we talked and visited—and rescheduled.

The second trip, we managed to get the canoe ride in, going from Riverside Park in Menomonie to Downsville, but the water was definitely low. I had to get out a few times for a push-over, and Ryan had to get out once, but dad was able to stay in the whole time. And because the water was so low, we scraped more times than I would like to admit as an experienced canoeist. When we got to the end, the outfitter said that the water had dropped six inches since we had put in two and a half hours earlier. We wouldn't have been able to do it if we had delayed a day. But we had a grand time. The weather was beautiful and dad enjoyed it, as did Ryan and I!

Ryan and I had decided to turn the rest of the weekend into a bike trip, so from there we headed over to Eau Claire to ride the Chippewa Valley Trail down to Durand, stay the night, and then ride back up the Red Cedar Trail to Menomonie on Sunday. My parents would then shuttle us to where we left our cars (neither of us have a bike rack, or a car big enough for two bikes, a bike trailer, and gear).

That worked like a charm. The campground in Durand is very nice—and cheap! Only $5.00/night for a tent with no electrical hookup. It's right on the Chippewa Valley Trail. We had an issue with our gas stoves, but they worked enough to make supper. The next day, a surprise was to find that some friends of Ryan's were staying there, too, attending a wedding. They generously cooked our oatmeal for us. We had a good visit with them and then rode back to Menomonie and then home again.

Below are a few pictures. 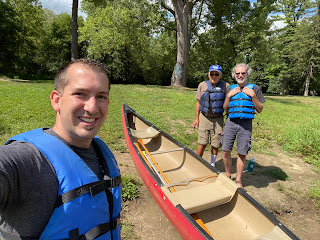 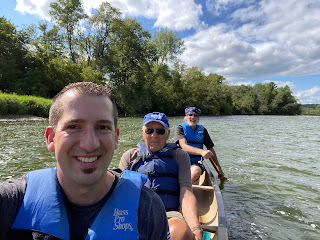 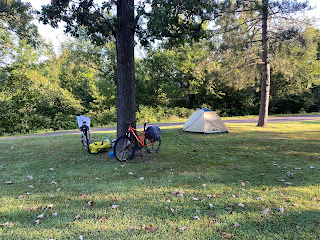 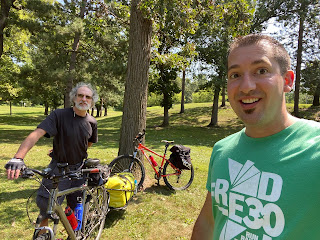 Ready to go on Sunday. Note the trailer vs. panniers.

These are from the garden 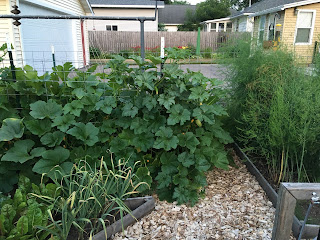 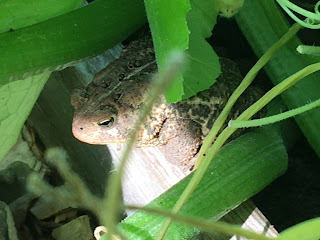 Theodore the toad amidst the squash 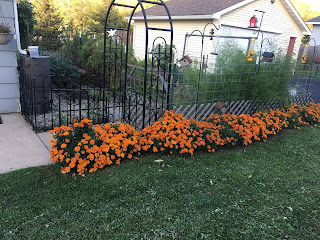 The marigolds did great this year!
Posted by jps at 9:32 AM