I forgot that today was Thursday. On Thursdays I come in before the sun comes up to read either Greek or Hebrew, consequently it was still dark and no photos. But, the snow is still beautiful and everything is white—at least for a while.

Well, over the last few days I took care of the laundry drain problem. It has been draining into the floor drain, and then running into the sump which empties into the septic (I know, but that isn't going to change!), but the lint from the washer was clogging up the drain and causing it to back up onto the floor. Result: wet basement floor :( So, I took it upon myself to run the line directly to the sump. The only problem was the cement dividing wall between the washer and the sump. My tools were a small masonry bit, chisel, and hammer.

Three hours later, I was about 1/3 done. Time for a bigger bit, but the stores were closed. So, the next day, I bought a 5/8 inch masonry bit. Armed with the bigger bit, I managed to get through the wall and expand the hole to 1.5 inches in about an hour. Of course, I burned out both batteries in the process—no problem, that's why I have a fast charger.

The next day, I put in the pipes and hooked everything up. Voila! No more drainage problems. But, last night a new problem reared its head; whoever did the plumbing had hooked the kitchen sink into the same pipe going to the septic as the sump. Result: the kitchen drain became the vent for the sump. Translation for those of you who don't know about venting: Sewer gas in the kitchen. Not acceptable!

So I now have a new plumbing project for this weekend...stay tuned :(

I now know more about plumbing than I ever wanted to and I have now run more drainlines and hot and cold water feeds than I ever dreamed possible. But, you know what? I no longer hate plumbing! I find that I actually am looking forward to this weekend's project. Now that is the grace of God! 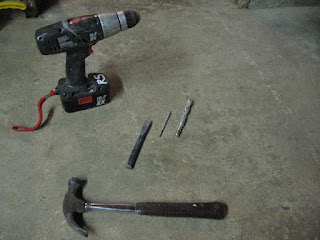 Tools of the trade. The small bit is what I started with, but the big one is what did the real work. 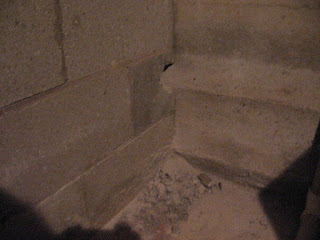