Today was a bit busy. I spent a good deal of it running back and forth between ASOR, ETS, and SBL. By the end of the day, I really needed a shower :)

We have 6 booths at SBL this year and have rearranged our floor plan to give us more space for books. I think you'll like it. We also have a new back drop behind our checkout this year. I posted a picture of it below. It contains over 160,000 book covers; Andy had to split it into 5 different files to keep his computer from crashing.

Setup went amazingly well, considering that at first there were only two of us instead of the normal four. Marti was stuck in Indianapolis overnight because of the FAA computer screw-up; Dave was tending ETS so I could do SBL setup. That left Gina and me. I don't know why, but it seemed to go faster this year. By the time Marti rolled in a little after 10 (she had a 6:00 AM flight!), we already had the backdrapes up, the tables draped, the posters up, and we were ready to work on books and the Skyline. I had already made one trip to ASOR for stuff we needed and had transferred some stock from ASOR to ETS as well—I was sure loving that the three conferences are only 2 blocks apart this year!

By 2:00, Jim had delivered all the ASOR stock and was helping Dave inventory and box the ETS produce. When Jim had to leave for a meeting around 3:00, I took over. We were completely done with setup by a little after 4:00—an amazing accomplishment! If we hadn't needed to inventory and move the ETS stuff, we would have been done even earlier. I don't know what was happening, but I sure am thankful!

Here's some pictures of the setup: 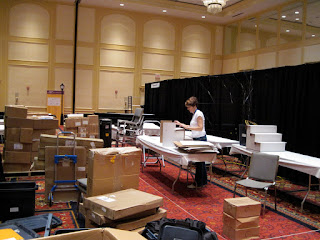 David Orton of Deo (we distribute Deo in North America) Gina and Marti setting up the rest of the Skyline display 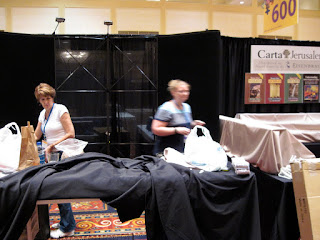 Putting the finishing touches on the Carta posters 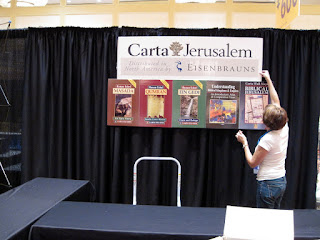