How does the garden grow?

I haven't posted much about my garden this year, but it is doing wonderfully well! We could use some rain; one of my rain barrels is empty, and the other one is only about 1/3 full. Beyond that, the weather has been wonderful for growing.

We had a great harvest of snap peas in June. They are done now, and I've replanted that area with a fourth planting of green beans, more green onions, and a second planting of carrots. My first and second plantings of green beans are both producing now; we're eating fresh beans and freezing them for the winter. I experimented with not blanching them before freezing last winter. The results were great; I suspect their storage life was shortened, but we use them all up before spring, so there were no ill effects. Sure does save time!

The strawberries are done, too. I ordered ever-bearing strawberries last year, but they sent me June-bearing instead, which was a disappointment, but the flavor makes up for it. I only have an eight foot bed, so we didn't get enough to freeze. Next year, I'll plant ever-bearing because it will be time for new ones anyway. A bed of strawberries is usually only productive for about three years before requiring replanting.

We are gorging ourselves on raspberries! Last year I planted some ever-bearing raspberries that a friend gave us. We got a few berries in the fall, just before frost. But this year, they are producing like crazy. They also are trying to take over the surrounding beds, so it's a continual pulling of stray plants in those beds. Raspberries spread via root, so I might have to move the berries to a corner bed. Right now they are in a central bed, so they can infect three other beds.

My squash are doing wonderfully well. The winter squash are climbing all over their trellis and are loaded with squash. I'm experimenting this year with a new variety in addition to the favorites (delicata and carnival). We'll see how it goes. The patty pan summer squash are producing more than I can eat, and the zephyr has given me two so far. I might end up pulling one of the patty pan plants if this keeps up; nobody in the neighborhood likes summer squash. For that matter, only the one neighbor likes vegetables at all! No wonder the US is so unhealthy.

I picked my first cucumber yesterday. Nothing beats a cucumber fresh from the vine! I'm trialing five different kinds this summer, trying to see what does best here. So far it looks like all of them are winners. If all the blossoms and small cukes bear, I'll have far too many! I don't make sweet pickles anymore because the sugar content is far to high; same for pickle relish. So that just leaves eating them fresh and making dill pickles. My dill is doing fine, so that won't be a problem, but there is a limit to how many quarts of dill pickles a person can eat!

I can't forget to mention the kale and chard! I've frozen quite a bit of it. I've never had chard and kale do as well as they are this year. I think it must be because of the organic slow release fertilizer and fresh compost I'm using. I'll write more about the fertilizer later; I'm running short on time right now.

How's your garden doing? Here are a few pictures for you. The first one is from the mid-April snowstorm we had—again! Third year in a row for a mid-April blizzard, although this one wasn't as bad as the first two. 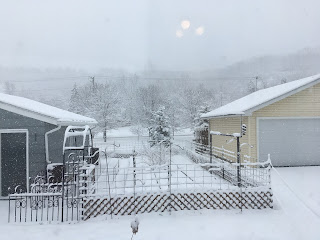 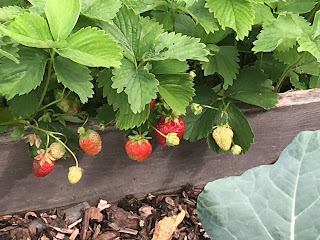 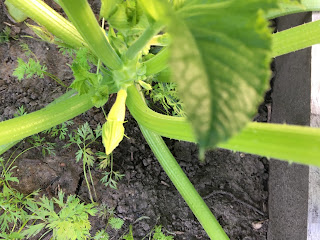 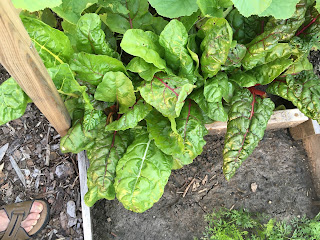 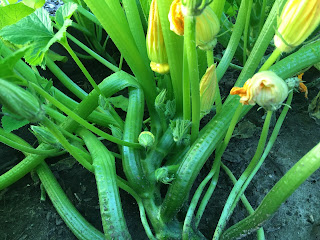 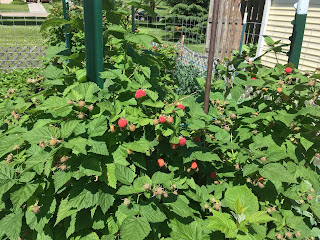