I had planned to ride a century on Saturday morning, but it rained. Not one to waste time on a weekend, I made 4.5 quarts of bread & butter pickles, 5 pints of yogurt, and some mayonnaise (I sure missed it on my sandwich last week).

It stopped raining around 1:00 PM, so I rode over to pick up a bushel of sweet corn. We normally freeze about a bushel for the coming year. I took my trailer to carry it back. The people running the stand weren't quite so sure I could fit the bushel into the trailer. It fit easily, once I turned it on its side, as you can see from the pictures below. 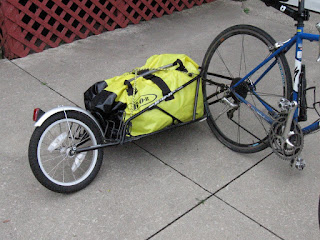 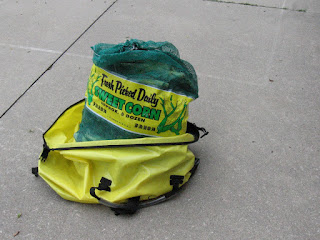 I spent the rest of Saturday afternoon shucking, boiling, and freezing corn. Done for another year :)

Sunday AM dawned nice and cool, with a bit of fog. Perfect day for a century. So, off I went with 4 water bottles, 2 with water, 2 with diluted Gatorade™. I always dilute it 50%, otherwise it tastes too sweet—and I only use the powder to avoid the corn syrup. I also put a few Power Bars™ in my bag as well.

The ride was nice, although around the 80 mile mark I started feeling it; the sun was higher in the sky and the heat was getting to me. This century was harder than the last one I rode, but that one was on Rails-to-trails old railroad bed. Can you say 2% grade, nice pavement. The smooth pavement was probably the biggest thing. After 80 miles of rough roads, your butt starts complaining, but I ignored it and finished in about 5.5 hours (actually 5:33, if you want to know the exact time). It was rather interesting that I averaged the same speed on this one, with the rough roads and hillier course, as I did on the last one with smooth pavement.

I was planning on planting some fall crops when I got home, but it was too hot. Later, I picked beans, tomatoes, broccoli, bunching onions, and cucumbers. I didn't have time to plant, so that will have to be tonight. I'm hoping to plant Brussel sprouts, broccoli, carrots, and peas for the fall harvest. Some of those will end up under the green house once it gets cold.
Posted by jps at 12:08 PM