We had a storm come up suddenly on Friday. I mean very suddenly and I mean a STORM. Winds up to 75 MPH were recorded. The power in our house went out for about 1/2 hour or so, but two places in town had gas lines damaged and were without power for a day or so. We saw some seriously large trees down when we went for our walk later. One tree had landed on a car, flattening it significantly. I heard that there were other cars damaged, too.

A similar storm last year took down a huge limb in our front yard that blocked the street. It also took down a limb on the neighbor's tree that landed on our garage roof. The damage was minimal and the limb slid off onto the ground.

This year's storm knocked another large tree limb off that same tree in the back. This limb was larger than the one last year. It could have done some serious damage to the garage roof, but it barely missed it, landing on my compost bins instead. So, Saturday, the first day in June that didn't get into the 90s F, I cut it up. See the pictures below: 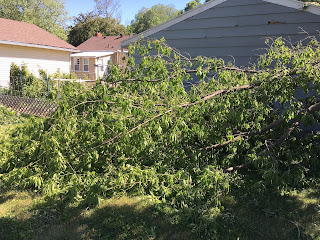 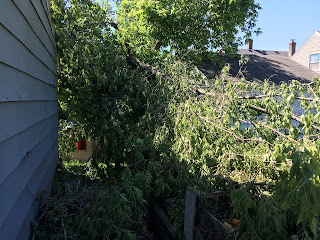