Yesterday I related my experience upgrading the harddrive/SSD and replacing the battery. I also mentioned that I lost the ability to turn my screens 90 degrees. I like doing that so that the middle screen of my three-screen setup is more like a sheet of paper. Like this: 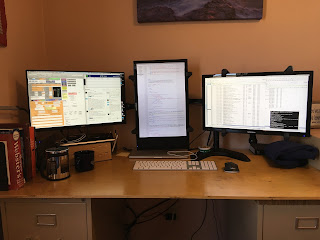 Late last week, I read that DisplayLink now supports it under Big Sur (MacOS 11.x), so I figured I would update my system over the weekend. So, Saturday evening I started by downloading both Big Sur and the DisplayLink update and then tried to install Big Sur. Well, something in 10.4 was causing my admin password entry to hang. Not sure what it was, but it probably was a kernel extension (kext) based on my research. Anyway, I decided to wait and try again on Sunday rather than stay up all night trying to get it to work : )

I started from a fresh restart and the admin password took with no problem. The computer did it's thing, rebooting a couple of times. Ever since I had a bad logic board on my older MacBook, I'm always nervous when a computer reboots. But it did fine; the fans raced a few times when the processor was doing its thing, but otherwise uneventful. I logged in and a few things asked for permission—Big Sur is very restrictive about what can access what. That's good, but even now, three days later, I'm still answering permissions. Some are turned down and I don't recall ever giving them permission to access that stuff in the first place! So, good move on Apple's part. I tend to be pretty restrictive about what I let touch what files and software developers always seem to think they need more permissions than I'm willing to give them.

When I first logged in, DisplayLink was showing me all three screens, just not allowing me to rotate them. I installed the update, gave it permission to record my displays—it needs that the rewrite to the three screens—and then rebooted. And waited. I only had the one screen via the HDMI, not the other two via the GUD 300. Great. Now what?

Frantic googling showed that others had the same problem. The DisplayLink site said to check the hardware in your About this Mac and showed a screenshot. Don't go down that road! Mine didn't show the DisplayLink, so I lost a bit of hair over that. Everything else looked fine, though. I moved my backup drive from the GUD 300 to direct just in case, but nothing changed.

More frantic googling turned up someone saying that you need to manually start DisplayLink from the Applications directory and implied you had to do that everytime you log in. So, I started it manually via Cmd-Space and typing DisplayLink.app and viola! I had three screens again. One thing more thing that no one had mentioned was that a DisplayLink logo shows up on your menu bar at the top of your screen.

Clicking on that gave the option to download an app that allows you to start DisplayLink on startup. Do it! It works like a charm; across multiple reboots and logouts I haven't had an issue with it. As for rotating the screens, it works great. See the two screen shots below. Be sure to click the menu bar option so you can easily change stuff. 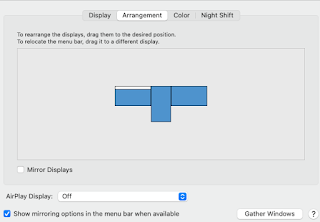 Now I just need to get Dropbox to stop grabbing my screenshots and dumping them in a subdirectory! I'm disliking how possessive Dropbox seems to be getting with the passing of time, but in my line of work its the default, so I need to use it. I just need to reign it in a bit more...

I hope that this helps someone with a DisplayLink problem. It would have been helpful to me to have all this in one place instead of chasing it down all across the internet!

One complaint about Big Sur: They took away the dashboard! They have been gradually taking away its functionality over releases, but now it's totally gone! It was handy for me because I would put sticky notes there and I had a calendar and iStatPro for monitoring the system. Not sure what I'm going to do, but I did find this for monitoring fan speed and cpu temps, which referred me to this and this. I've installed them both; not sure which I'll keep. I moved stickies to the desktop, but I don't like it. Not sure what to do about a quick calendar view yet. I like seeing the whole month, without any added stuff. There's got to be a small app for that somewhere...