Last summer, while the pandemic was causing people to drive less and stay home, a terrible thing started happening. Drivers were getting more careless. I noticed it on my bike rides. I was being given less clearance. Frankly, it made me nervous riding my bike for the first time since I was in high school. And nation-wide the number of bike-car collisions was also going up—as was the number of collisions per mile driven. Basically, people were getting even more careless in driving.

Because of where we live, for me to ride any distance requires riding on busy state or federal highways. Consequently, I made the decision after almost 50 years of road-riding, to move strictly to the indoor trainer. Nothing that I've seen since has made me regret that decision. In fact, rather than simply careless, I suspect some drivers have become downright hostile to bicyclists. There has always been a bit of that. I've experienced it, but was only forced off the road once in all my years of riding.

But, this today, on NPR is truly horrific. Basically, the guy was aiming to hit and at the least injure cyclists. I don't know any more than the article says, but it is truly a sad state of affairs. I know most of you won't click through, so here's the relevant section:

A driver in a pickup truck plowed into bicyclists during a community road race in Arizona on Saturday, critically injuring several riders before police chased the driver and shot him outside a nearby hardware store, authorities said.

Six people were taken to a hospital in critical condition after the crash in the mountain town of Show Low, about a three-hour drive northeast of Phoenix, police said. Helmets, shoes and crumpled and broken bicycles were strewn across the street after the crash, and a tire was wedged into the grill of the truck, which had damage to its top and sides and a bullet hole in a window.

Here's a picture. Not pretty. I know what it's like to get hit by an F-150. It isn't fun. No helmet is going to help you when a truck hits you. 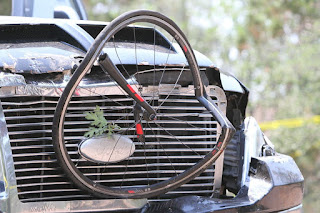