Zondervan kindly sent me a preview copy of their forthcoming A Reader's Hebrew Bible (RHB). I asked for a sample page to put on our website, and they sent me the whole Bible! How's that for service? Anyway, I appreciate it and hope they don't regret doing it after they read this review :) Here are the bibliographic details:

I showed it to 4 other people here with varying degrees of Hebrew. It seems that the less Hebrew they knew, the more they liked it, which is a good thing, since it is aimed at those with weaker Hebrew skills. Personally, the first thing I noticed was the bleed through on the pages. I don't know if the page scans below will reflect it or not, but under normal room lighting, the bleed through from the opposite page is pretty distracting. However, when looked at under a bright reading lamp, it is barely noticeable. The bleed through isn't evident at all on the PDF on Zondervan's website, since it is a function of the thin bible paper they use.

I'm also not sure I like the gray screening of proper nouns occurring less than 100 times. I like the idea, since more than once I have spent a good bit of time looking for a word in the lexicon, only to discover that it is a proper noun, but the execution isn't quite what I would like it to be.

The vocabulary footnotes contain words occurring less than 100 times, with a 7 pages glossary with words occurring more than 100 times. A nice feature is that if the same word occurs more than once on a page, the same footnote number is used (provided the sense is the same). This is an improvement over the A Reader's Greek New Testament (RGNT), which footnotes each occurrence, even if on the same page. The foreword says that the glosses were derived primarily from BDB and HALOT, secondarily from Holladay and DCD.

The text has no masora or apparatus, but that is to be expected; it is a Reader's Bible, a fact they stress in the introduction. Qere and Ketib are marked in the text, which, by the way, is the Westminster version of Leningrad; the same text that BHS and BHQ use. This is a plus, since you can read with others; this is unlike the RGNT, which uses a different text than the N-A and UBS texts.

I found the introduction to be very good; I just hope others will read it. The editors very clearly state the goals and limitations of the work. They hope to encourage reading and warn heartily against using their glosses as definitions. They also recommend that you have a text with an apparatus available—something with which I heartily agree!

OK, the real question is, "Would I use it?" My answer is...No, I would not use it. Why wouldn't I use it? Because I know enough Hebrew to use a straight text with a lexicon. Also, because I prefer to look up words in a lexicon where I can get the fuller meaning that I can from a simple gloss.

BUT, I know lots of people who would use it, and I would definitely recommend it to them. I would recommend it more heartily if Zondervan had not used such thin paper (and if they had been a bit more careful about the word justification in layout; there are places where the words are way too far apart on the line. If they had just taken a bit more time...but for most that is a cosmetic issue that few outside of publishers would notice). As Rick Mansfield has said repeatedly, Zondervan seems fixated on thinline bibles. The HRB is about 25-33% thinner than the large BHS and weighs a bit less. Personally, I would rather have seen them use a thicker paper and eliminate the bleed through. Maybe UBS will do one and get it right, that's what happened with the UBS Greek New Testament. Zondervan took two editions, and still doesn't have it right; hopefully they will listen this time and get the Hebrew one right. 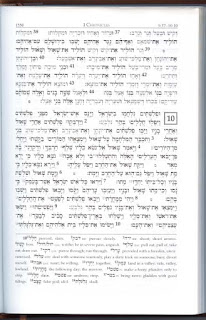 This is a scan of Chronicles, note the gray screened names 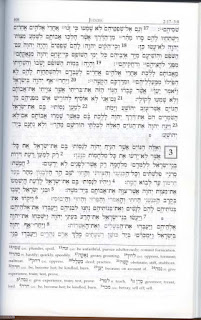 This is from Judges 3

Thanks for the review. If you are willing, please email me places where you think the spacing between words is too large and I'll see what can be done.

Also how would you suggest executing the screening of the proper names? You can respond to readershebrew at gmail dot com.

Thanks.
A. Philip Brown II

Thanks for the review James, it is very helpful. I bet the footnote for Job takes up 3/4 of the page!

thanks for the review. I put it up on my blog. I found you through Nick Norelli's blog.