Last year and in 2006 we taste-tested Twinkies™ that had expired. It's that time again!

Here is a picture of the poor thing: 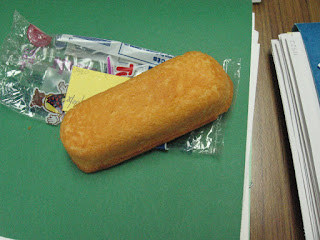 This Twinkie™ is now 3 years past its expiration date. I think it is safe to say that Twinkies™ do not have an indefinite shelf life! It looks ok, but it is hard and, well, almost inedible. I hope to upload a video of the taste test to You Tube—I'll let you know. But, in the meantime, I do think I have an idea for a new Veggie Tales™ episode: 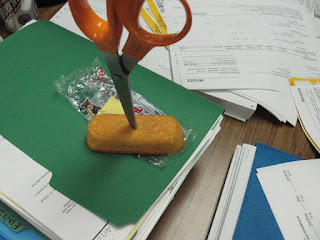 Scissors in the Twinkie (instead of Sword in the Stone...)
Posted by jps at 12:59 PM