Let's see how obscure we can get 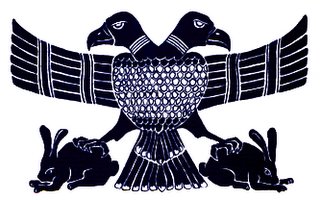 Joe Cathey and Jim West have been posting Sumerian and Akkadian on their sites this week. Well, I never learned Sumerian and my Akkadian is so rusty I would barely recognize an infinitive, so I am not going to play that game. But, I do remember one phrase from my Hittite, so let's see how many Hittitologists there are :)

(I don't know how to make shin or macron appear, so a: is long a and s is shin)

By the way, the logo is from the Chicago Hittite Dictionary. It is the Hittite empire's official seal. We poor graduate students used to joke that the two heads were Professors Gueterbock and Hoffner and the rabbits were the graduate students...
Posted by jps at 6:02 AM

To undestand better Hittite you have to study Romanian!
exemples:

"it disappears, yet it remains"

quite beautiful, and if my memory serves me right it was a quote of some official scolding someone for losing something.... ;-)