We are officially open for business again—actually we were as of Friday. It was fishing opener, but most of the lakes here are still iced over, so it was a real dud. We had no guests—not that we expected any with the temperatures being what they have been both here and in the Twin Cities. Nobody wants to escape the "heat" of 45–50°F to come up here and cool down.

Anyway, this years cabin prep was easier and harder than last year's. Last year we started in March and worked on seven cabins (out of nine), painting and repairing. This year, we started in April and only worked on three cabins. But the work we did on those three was more significant, by far.

We replaced two bathroom floors and one living room floor. The one in Pine was being held up by a jack that I put under there 3 weeks before the end of the season last year! The toilet was about to go through the floor...So this spring, as soon as the snow was low enough to enable us to get under the cabin, we tore it all out. I had a local guy helping me and he took a few pictures, but they got lost or I'd post them. Suffice it to say that it wasn't pretty! The floor joist had been cut to make room for the toilet and the header that was supposed to reinforce it had rotted out. All that was holding the toilet before I had put the jack under it was a pipe hanger wire that was about to let loose.

Can you imagine the scenario: Where's mom? Oh no! She went to the bathroom and now she's nowhere to be seen! Gives new meaning to the earth opening up and swallowing somebody, doesn't it? Sinkholes in Minnesota!

Well, that won't happen now : ) The floor is all repaired with new vinyl and fresh paint and caulk. Better than new, probably! 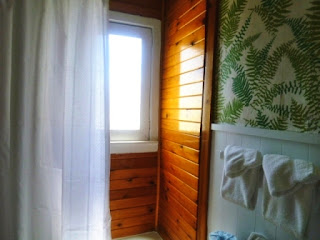 Notice that we don't show the floor in this picture!

The living room floor was in Silver Maple (actually a motel room). There isn't sufficient air flow under the motel, so the northeast corner was too moist and the floor was starting to rot out. We tore out a four foot by four foot section and replaced the joists and plywood. Pretty easy, actually. We were planning on putting new carpet and tile in there anyway, so it just added a bit more to it.

The one that surprised me was Spruce. From the top, it looked like a minor bubble in the floor where some tile was coming loose. Right! We tore off the tile in that section only to discover that we needed to redo the whole floor. The room is an L-shape, so that complicated things significantly. Add to that that the crawlspace will make even a person without claustrophobia claustrophobic! and you have a real good time...that one took the better part of two weeks to finish, but it's done now and looks great.

Next time I'll tell you about the interesting experiences of turning on the water this year...