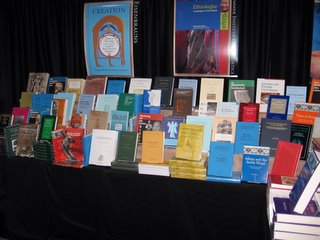 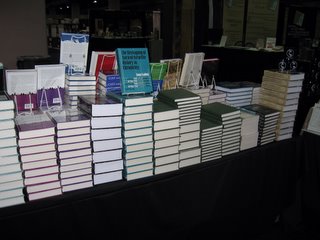 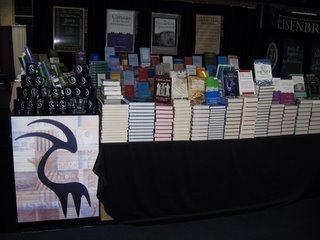 Some photos of the booth before we began selling. Needless to say, the stacks are much lower now than they were yesterday.

The book exhibits opened at 8:30 and, as usual, Peter Gentry was our first customer. Jim West and Joe Cathey were probably second. Nice to be able to put a face to names.

After the hectic pace of the setup, today seemed a bit more relaxed. Not to say we weren't busy, we certainly were. But, the Carta banner got printed and put up, you can see it in the previous post. I only was late to one of my appointments, and he was trying to find me to reschedule, so that worked out well.

Since it is becoming general knowledge anyway, I will "officially" announce that Eisenbrauns has signed a distribution agreement with Vandenhoeck & Ruprecht, which is why you saw Eisenbrauns employees manning their booth yesterday. Next year we will be in the same booth. But, what that means is that V&R books will be more easily obtained here in the North American market. We are excited about the opportunity to make their titles available to you--especially the Goettingen LXX (my philological biases are showing).

Last night I attended the reception/paper for/by Michael Fox. We just published his festschrift, Seeking Out the Wisdom of the Ancients and there was a reception. Michael's paper was delightful, he talked about the "subjective" side of his "objective" books. His best quote, talking about Qohelet whom he said must have been bi-polar: "It's a good thing there wasn't lithium, or my bibliography would be a good deal shorter." Afterwards it was a nice chance to put faces to names. I find that my BookNews e-mail has made me notorious.

As the Fox reception was winding down around 10:30, that gave me a chance to put in an appearance at the Eerdmans reception. They have one of the nicest and its a good chance to see people that I miss at the booth. Ended up talking until after midnight with Roy from Accordance and Dr. Instone-Brewer about digitizing texts and related issues.

I will only be able to post about once a day, since Internet access is limited to the free wireless areas and during the day I am running in 60 directions. Today is the booksigning for Sacred Bridge, be sure to drop by and have Anson and Steven sign your copy.
Posted by jps at 6:30 AM