After taking care of the booth, I checked my backpack and laptop at the hotel and went for a walk around Philly. Walked up to city hall and then saw the Liberty Bell, Constitution Hall, etc. I was too late to get tickets for the tour, but could wander around outside. I couldn't believe the security to see the Liberty Bell, it is worse than an airport...

Before I caught the train to the airport, I made one more pass through the Reading Station Market. What a neat place, I wish there were something like that here in Indiana.

Got to the airport and ran into Michael Thomson from Eerdmans, we were both on the same flight. He told me of some nice book deals he had made. They will be coming out in the next year or two. My flight out of Philly was only a few minutes late, so I figured I could catch my connecting flight out of Detroit with no problem. Turns out I could have been a lot later. There was a fume leak of some kind on the plane next to us. There were guys in silver suits and emergency vehicles all over. We ended up being about 45 minutes late in taking off. I got into Fort Wayne, grabbed my baggage and drove the hour home. 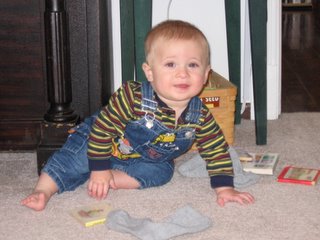 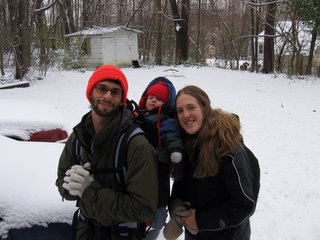 This AM, I got to see my grandson for the first time since May, isn't he cute, that's my daughter and son-in-law in the second picture? Debbie had a chance to spoil Joshua for 2 days before I got home. There was also snow on the ground, and it is packing snow! Snowman time. Well, I needed to come in to work first, but its more fun playing with a grandson, that's why these posts are so late.

Well, I won't be posting until next Monday, so have a good Thanksgiving day and remember to be thankful, I know I am.
Posted by jps at 2:06 PM

You have a beautiful family! What a double blessing - a grandson to meet you and snow on the ground. Could it get any better than this?