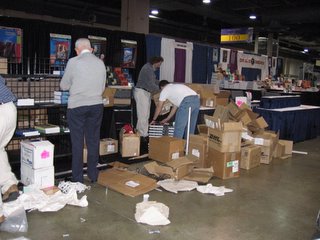 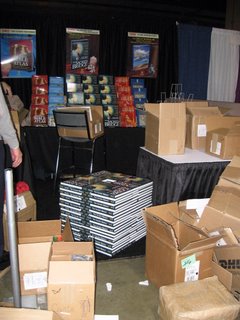 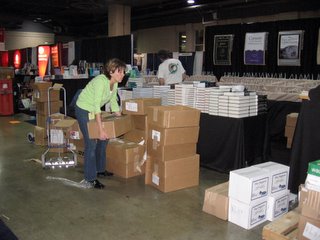 These are some pictures of setup. There were 8 of us, counting Emanuel from Carta and Darryl from SIL. Large crew, almost too many because with the boxes and all there wasn't much room. Dave is building a tower of Sacred Bridge, I'm sure it will all sell to the point where even an archaeologist won't be able to find the foundation :) Gina will probably shoot me for posting the last one, but that's her carrying the box, with me in the background arranging books.

During setup we found 8000 bag stuffers that we had sent earlier to be stuffed into your tote bags. Guess what, the people at the receiving dock had put them with our stuff instead of giving them to the correct people! So, we paid for a service that we didn't get, at least not totally. They told me that they would stuff them in the remaining tote bags. "In everything give thanks."

Setup took extremely long, longer than anyone remembered it ever taking. At the end there were 4 of us, because the others had commitments for the evening. Dave, Gina, Marti and I finished around 7:30. But that's when the fun began. We had forgotten to bring a banner for the Carta area of the booth. Now we had to get it printed locally. Got a hold of a local Kinko's, found out they could do it (for a premium!). Tried to contact our graphics guy, Andy, to have him e-mail the file to them. I hope it works. We'll see later today.

Then Dave tells me that it costs $10.00 a day for Internet in the hotel and the workout room costs $10/day per person! Yikes! So, I'm sitting in the public area of the convention center catching up on e-mail and blogging this.

I have never felt so fleeced in my life. We're paying 30% more for our hotel than usual, without Internet and a workout room. The food is still not cheap and the service is slow, although the waitress last night was friendlier and apologized for the slow service. Again, "in everything give thanks!"

Are you noting a recurring theme here? I Thessalonian 5 may seem a high calling, but in Ephesians it says "for everything give thanks." I guess the Biblical writers had a higher view of God than most of us! And a higher view of grace, since it is only by grace that we can do that.

Which leads to an idle musing--I'm Wesleyan-Arminian to the core. You cut me and I will bleed free grace. Not free will, free grace, there's a difference. But, I have a stronger concept of God's sovereignty than some of my Calvinist friends. Explain that, if you wiil...